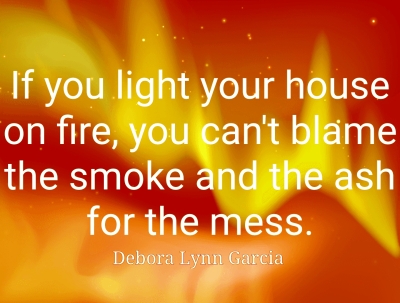 It just occurred to me today, while reading some articles about different kinds of domestic abuse, that the response and behavioral changes by the abused seem to be the things that invite more abuse. The abuser doesn’t like what you have become after being abused, so then that becomes a reason for more abuse, anger, hostility, and now resentment, too.  Abusers don’t seem able to see their part in the victim’s behavior and become incensed when it is brought to their attention.  The victim’s behavior isn’t likely to become healthier while continuing in that environment, and so the abuser’s attitude also becomes worse. The cycle of the behavior of an abuser and victim, and how the victim becomes more victimized as they suffer from the fallout of abuse is only a testament to the repetition and space that is created by the abuser.

We all have to be responsible for our actions. But if you are going to be the creator of a  hostile environment, it is up to you to clean it up if you don’t want hostilities to linger and grow. You can’t ignore the pain you inflict, the mess you create and leave behind, and expect it to repair itself – and especially if you repeatedly set the fire. You can’t blame the person/s you are abusing for not cleaning up the catastrophe. As a matter of fact, they can’t. If you light your house on fire, you can’t blame the smoke and the ash for the mess.

Bottom line is this: If you set the fire, it is up to you to bring the water and the balm. If you don’t want the smoke and ash to linger, then it is your responsibility to cease setting fires. The other person can do whatever they do – leave, stay, apologize, argue, cry, take responsibility for your blow-up – doesn’t matter. You will still be the same fire-starter. And you will do it again – to that person or the next.

Nothing good can survive in that mess. If it doesn’t all burn up in the fire, the smoke and ash will eventually suffocate anything left.

This site uses Akismet to reduce spam. Learn how your comment data is processed.